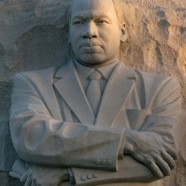 In April, 1963, Martin Luther King, Jr. penned, from jail, what is now the well-known Letter from Birmingham Jail. Within that lengthy letter, he wrote these words:

There was a time when the church was very powerful. It was during that period that the early Christians rejoiced when they were deemed worthy to suffer for what they believed. In those days the church was not merely a thermometer that recorded the ideas and principles of popular opinion; it was the thermostat that transformed the mores of society. Wherever the early Christians entered a town the power structure got disturbed and immediately sought to convict them for being “disturbers of the peace” and “outside agitators.” But they went on with the conviction that they were “a colony of heaven” and had to obey God rather than man. They were small in number but big in commitment. They were too God-intoxicated to be “astronomically intimidated.”

They brought an end to such ancient evils as infanticide and gladiatorial contest…But the judgment of God is upon the church as never before. If the church of today does not recapture the sacrificial spirit of the early church, it will lose its authentic ring, forfeit the loyalty of millions, and be dismissed as an irrelevant social club with no meaning for the twentieth century. I meet young people every day whose disappointment with the church has risen to outright disgust. 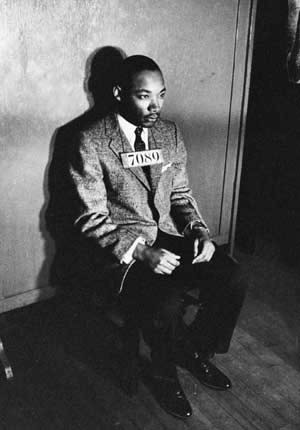 1. Reconsider Because the Gospel of Jesus Christ is the Only Gospel that Provides Freedom

In giving his reasons for being in Birmingham, King states:

Beyond this, I am in Birmingham because injustice is here. Just as the eighth-century prophets left their little villages and carried their “thus saith the Lord” far beyond the boundaries of their hometowns; and just as the Apostle Paul left his little village of Tarsus and carried the gospel of Jesus Christ to practically every hamlet and city of the Greco-Roman world, I too am compelled to carry the gospel of freedom beyond my particular hometown. Like Paul, I must constantly respond to the Macedonian call for aid. [emphasis mine]

It is absurd, is it not, that King compares his social justice ‘gospel’ with the Gospel of Jesus Christ, and his actions to be commensurate with that of the Apostle Paul and the Macedonian call for aid? The ‘gospel’ of freedom King speaks of, quite clearly, is not the same Gospel of Christ which alone brings freedom to men; and, as you will see, goes beyond that of a mere social justice message. The fact that he compared his then current work to that of the Apostle Paul and the biblical prophets is logically invalid and completely unrealistic, to say the least.

2. Reconsider Because King’s Concept of Justice Was Worldly

In describing the injustices faced by Negroes, King tells us in no uncertain terms:

When you are harried by day and haunted by night by the fact that you are a Negro, living constantly at tiptoe stance, never knowing what to expect next, and plagued with inner fears and outer resentments; when you are forever fighting a degenerating sense of “nobodyness” — then you will understand why we find it difficult to wait. There comes a time when the cup of endurance runs over and men are no longer willing to be plunged into an abyss of injustice where they experience the bleakness of corroding despair. I hope, sirs, you can understand our legitimate and unavoidable impatience.

The Gospel of Jesus Christ, and the salvation it brings, would have eliminated much of this frustration. Yet King is not interested in that message. Despite his esoteric rhetoric, everything in this statement tells me King had no interest in encouraging biblical perseverance, to himself nor to others, and that his concept of ‘justice’ was warped by frustration we all experience when we do not get what we want.

3. Reconsider Because of King’s Twisting of Church History

King goes on to compare his quest for social justice to the sufferings and persecutions of the early church:

There was a time when the church was very powerful. It was during that period that the early Christians rejoiced when they were deemed worthy to suffer for what they believed. In those days the church was not merely a thermometer that recorded the ideas and principles of popular opinion; it was the thermostat that transformed the mores of society. Wherever the early Christians entered a town the power structure got disturbed and immediately sought to convict them for being “disturbers of the peace” and “outside agitators.” But they went on with the conviction that they were “a colony of heaven” and had to obey God rather than man. They were small in number but big in commitment.

What King fails to realize is that the early church was persecuted for their undaunted proclamation of Jesus as Lord over all, not because they marched into towns in the cause of social justice. Yet this particular quote has been claimed by men such as John Piper, and others as a ‘powerful call’ to the Church. This is not a call to the Church of God. This is a call that deceives many into thinking that the early Church was more interested in social equality and justice than spreading the Gospel of Jesus Christ. When the Church got persecuted, it was because of the Gospel, not their stand on racial equality. Christians who use this quote as an encouragement to other Christians are either lacking in knowledge regarding the corrupt character of King himself, or, they are playing the spiritually immature, shallow-minded, politically correct game which results in their own increased popularity (which they desire) and, perhaps, furtherance of what ever career they are pursuing.

Then there is this thing called ‘manifest destiny’.  Manifest destiny is defined as: A policy of imperialism rationalized as inevitable (as if granted by God)

King goes so far as to declare a ‘manifest destiny’ for the negro demands:

We will win our freedom because the sacred heritage of our nation and the eternal will of God are embodied in our echoing demands.

And precisely where in Scripture is this revelation of the eternal will of God regarding your demands?

Religious rhetoric and false comparisons of himself to the biblical prophets and to Apostle Paul in his search for negro superiority, payback and unequal justice for all are just that, empty, broken cisterns that hold no water.

5. Reconsider because Martin Luther King, Jr. Calls the garden of Eden a myth in line with “other oriental religions” and says that science and the Bible are at odds.

6. Reconsider because Martin Luther King Jr. on the night before he was assassinated, spoke these words which indicate that he believed the Gospel of Jesus Christ alone was unsatisfactory, but needed more, like classical Greek reasoning:

“As you know, if I were standing at the beginning of time, with the possibility of general and panoramic view of the whole human history up to now, and the Almighty said to me, ‘Martin Luther King, which age would you like to live in?’– I would take my mental flight by Egypt through, or rather across the Red Sea, through the wilderness on toward the promised land. And in spite of its magnificence, I wouldn’t stop there. I would move on by Greece, and take my mind to Mount Olympus. And I would see Plato, Aristotle, Socrates, Euripides and Aristophanes assembled around the Parthenon as they discussed the great and eternal issues of reality.”

And what does that tell you about those promoting the honoring of this man?

King does make a statement that I whole heartedly agree with in the Birmingham letter:

“Society must protect the robbed and punish the robber.”

Yes indeed, Michael, and society has been robbed of the truth regarding you, and that with the help of the FBI by sealing your records until the year 2027. Who in society will protect the society itself when they are the ones robbed?