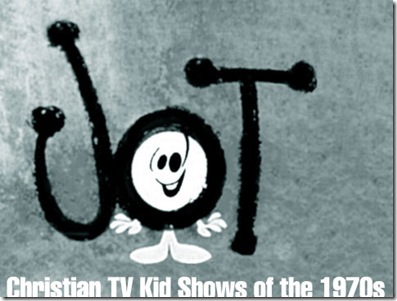 When I was growing up there was the occasional JOT cartoon character that always had a lesson that needed to be learned by kids. Produced by the SBC, they were short, 5 minute clips of a bouncing, talking dot that always seem to get in trouble, yet at the same time, teach those kids watching an important moral lesson. I was one of them, and I thank my dad for calling me to the television in the early 1970’s to pay attention. I was hooked, and I recall getting a tad excited anytime Jot was on the screen.

I thought about Jot today, and did a quick search, found a few videos, and a little background information on the character. Fond memories indeed, and yes, I’ve been smiling most of the day. Check the background, watch the video, and if you’re under 40…allow me to introduce to you an old cartoon with a lot of good things to say – back when TV allowed Christian messages.

Jot was a series of five minute short subjects produced and written by Ruth Byers for The Radio and Television Commission of The Southern Baptist Convention. The first batch of thirteen segments debuted in 1968, they were non-secular but carried a strong religious message.

Jot was meant to teach morals and Judeo/Christian ideals and was distributed to television stations around the country to run alongside the Bugs Bunny, Little Rascals and Hanna-Barbera cartoons shown on their local kid shows.

In the first segment, Jot steals a cupcake from his mom and goes through a psychedelic freak-out of conscience. In most of the morality plays, it’s Jot’s conscience that speaks loudest, a concept that may be forever lost on modern audiences.

Lessons in obedience, honesty and virtue are reinforced by feelings of guilt when Jot does the wrong thing. This is all balanced with words of wisdom from Jot’s parents – and implicit forgiveness from God.

Simple and inexpensive to relatively produce (each episode of Jot cost $15,000 to produce), the graphic style of the cartoons was bold and simple, a style of art only now enjoying a renaissance with the new shockwave cartoons popping up on the net.

At the end of each segment, an address was provided for kids to send off for Jot stuff – a Jot booklet and button.

The promotion was a successful one for the Southern Baptist Convention, generating lots of mail and long memories from the kids who watched the cartoons.”